A girl. Her guy. A waitress. A ukulele. Copious amounts of chicken. 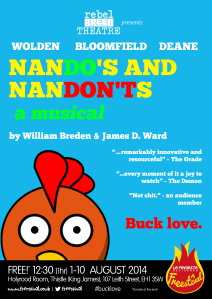 This musical comedy shows the ups and downs of Caroline, and her boyfriend Melvin, as their relationship is played out in a chicken restaurant. The show features all original songs, dancing, live music, and a bucket of laughs. You’d be clucking mad to miss it, chicken.

COMING TO THE 2014 EDINBURGH FRINGE FESTIVAL

“…remarkably innovative and resourceful in a world of ever-changing alternative comedy.” – Natalie Beech, The Grade

“I cackled my way through both of the two halves and found every moment of it a joy to watch.” – Celia Wilding, The Demon

The 35th most eye-catching title at the 2014 Edinburgh Fringe Festival – What’sOnStage.com

Special thanks to Nicola Brown and Isabelle Staniaszek